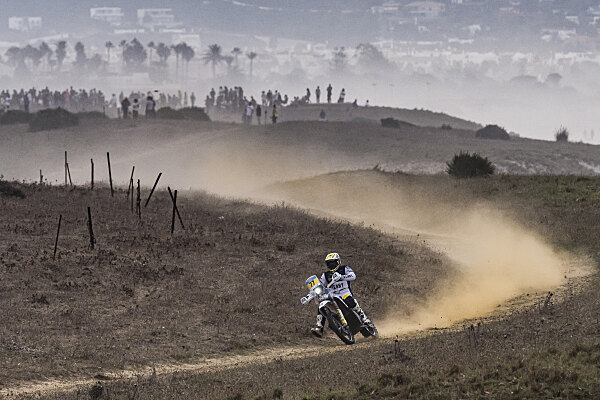 Despite being short at just over 100 kilometres, the timed special on stage four of the Andalucia Rally delivered challenging terrain and navigation to all competitors for their final charge to the finish line. Due to his third-place result from Saturday’s stage three, Luciano Benavides entered the special with two riders ahead of him. With a three-minute deficit to the provisional leader of the rally coming into the final day, Benavides knew it would be tough to make up the time required, but nevertheless gave his all over the opening half of the stage.

With the times extremely close between the top three, a small mistake by Luciano later in the special cost him several valuable seconds, and with a sizeable advantage to the fourth-placed competitor, Benavides decided to ease his pace slightly over the final kilometres to ensure a safe podium finish. Bringing his FR 450 Rally home just one and a half minutes behind the stage winner, the young Argentinian secured third place in the event, and with it, his second consecutive world championship podium.

Following a tough start to the season, where he placed 13th at the Dakar Rally, Luciano delivered superb performances over the three subsequent rounds to ensure his top-four result in the championship rankings. A stage win at the Abu Dhabi Desert Challenge was followed by a podium in Morocco and third place in Spain. On top form, Benavides now looks forward to the Dakar Rally next January. Joining his teammate in Saudi Arabia, Skyler Howes will also be aiming to carry the speed that took him to victory at the Rallye du Maroc into the first round of the 2023 season.

Luciano Benavides:“I’m happy to complete the last day of the rally – it was another crazy stage of hard navigation and really tough tracks. It was shorter than the previous days, but it was still quite challenging due to the tricky navigation and less visible pistes. There were also many, many rocks and stones, so it was hard to find a good rhythm. I made a little mistake near the end, but I knew if I stayed at a solid pace, my third place would be safe, so I eased off a little in the final kilometres to bring it home safely. To get back-to-back podiums from here and Morocco and to be able to share the podium with my brother feels great, and the result has moved me up to fourth in the world championship, so I’m really pleased with that, too. It’s important to finish the season strong, with good speed and no injuries, so the plan now is to carry this form to Dakar.”