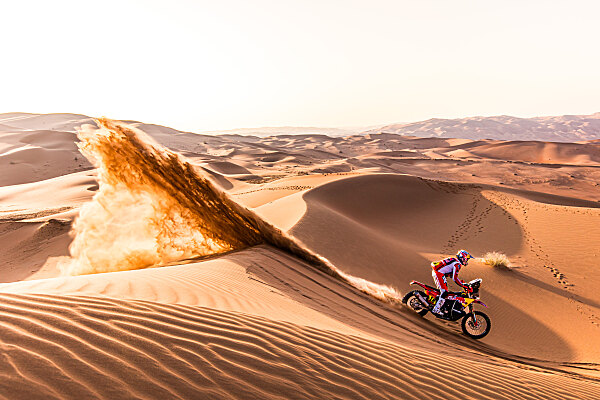 SECOND PLACE FOR SANDERS ON LEG ONE OF THE DAKAR RALLY MARATHON STAGE.

Marathon stage, leg one at the Dakar complete and it was a pretty positive day of racing for Red Bull GASGAS Factory Racing’s Daniel Sanders. As the 12th rider into the 274-kilometer timed special, Sanders benefitted from chasing the leading riders on stage and capitalized on his starting position to post the second-fastest time. In the process, Chucky closed the gap on the overall leaders and now advances to seventh in the provisional standings. With three stages to go, a top-five finish at this year’s event is well within reach.

Daniel Sanders:“Today wasn’t too bad. It took a little while for me to get up to speed and then at around kilometer 40 there was a tricky note in the roadbook. I slowed up a little to make sure I was heading in the right direction and then pushed on to refueling. After that I rode with Luciano Benavides for the rest of the stage which was good, and it was a good gauge of knowing the speed up front. Second’s decent enough ahead of tomorrow’s shorter stage. I’ve just checked the bike over, all the fluids and everything, and it’s in great shape so I’m looking forward to getting back out there tomorrow.”

The marathon stage at the Dakar is always a tough one for riders as they need to strike a fine balance between posting the best time possible on leg one, while making sure their bike remains in good shape for leg two. For Sanders, placing second was clearly a strong result and after giving his bike a quick once over ahead of tomorrow’s stage 11, Chucky, and his awesome RX 450F, are now ready for another day of sand surfing through the Empty Quarter.