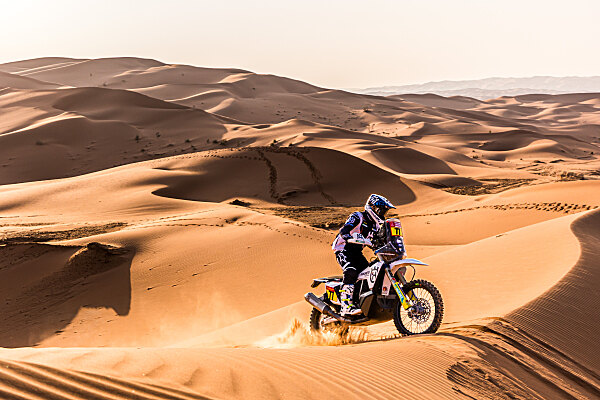 On a hugely successful day 11 in the Saudi desert for Husqvarna Factory Racing, Luciano Benavides has claimed his third stage win of the event and in turn advances to sixth place overall in the event’s provisional overall standings. Leading those standings after an impressive ride to fourth place on today’s stage, Skyler Howes now holds a narrow 28-second lead at the top of the timesheets.

Marking the first half of the event’s marathon stage, deep into the Empty Quarter region, day 11 at Dakar saw riders complete a timed special of 274 kilometres, predominantly made up of a seemingly endless expanse of dunes. Of the two Husqvarna Factory Racing teammates it was Luciano Benavides who mastered the terrain the best, posting the fastest time to kilometre 63 and pushing hard from then on. Taking the stage win by an impressive one minute and 38 seconds also moves Luciano higher in the overall standings to sixth, where he trails rally leader and teammate Skyler Howes by 18 minutes.

Handling the pressure perfectly, Howes set off as the 18th rider into the special and immediately began to make up time on those ahead of him. Swapping the top two positions with his teammate for the first half of the stage, a few minor issues later on cost the American a little time, but he was still able to bring his FR 450 Rally safely back to the bivouac in fourth place. Retaking the overall rally lead and holding a near-30-second advantage over second-placed Toby Price, Howes will have the added benefit of chasing down his nearest rival on Friday’s stage 12.

Luciano Benavides:“It was a really, really nice stage. I enjoyed racing through the dunes and was able to make up good time, too. There was a big variety today, some of the dunes were really big and in between the ground was very hard to judge as well, with lots of softer areas that could catch you out. The navigation was not too difficult today, the challenge came from trying to find the fastest line through the dunes. I did a good job and was able to make up some more time, which is great. I’m leading out again tomorrow and I’m really looking forward to the challenge.”

Skyler Howes:“It was a really fast stage today with lots of dunes – lots of big dunes! I found a good rhythm out there and was making good progress. I did get stuck in the soft sand on a couple of dunes and had to turn around to attack those again. There was one waypoint that I had to circle around to get properly as well. The bike is in great condition, which is great for the marathon stage, I just need to stay focused because the times in the standings are really close. I think it’s going to be like this all the way to the finish, which makes it pretty exciting.”