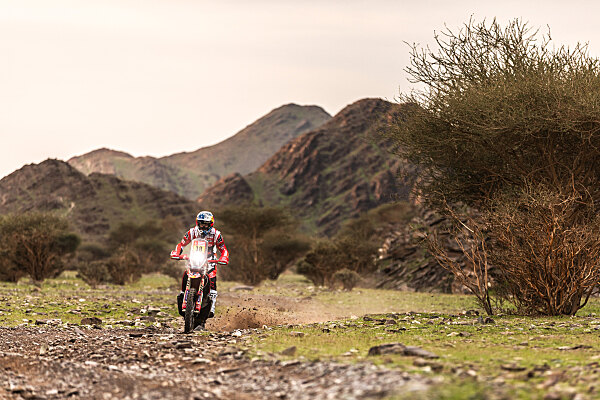 Ticking off stage two at the Dakar Rally with the ninth-fastest time, Red Bull GASGAS Factory Racing’s Daniel Sanders maintains his fifth overall placing in the provisional standings! Knowing the importance of posting consistent stage results every single day, Sanders upped his pace when he needed to today, then backed off near the end to bring his RX 450F home safe and sound in ninth. Daniel now lies just under three minutes adrift of the overall leader with plenty of racing still to go.

Daniel Sanders:“It was a big day today and definitely a long one! In the beginning I pushed hard to make up time and then settled into a decent rhythm. I think the stage win was there for the taking today but this is such a long race that it’s best to not lead out on a stage this early on, and so for tomorrow’s stage in the dunes I’ll now have a decent starting position. There will be a time or two when winning a stage or finishing up front to lead out the next day will be necessary, but today wasn’t it!”

Early morning rain ahead of stage two didn’t dampen Sanders’ spirits one little bit as before switching to rally he plied his trade as a very successful enduro racer. Clearly unfazed by the conditions, the Aussie excelled with his high pace and minimal mistakes to remain among the early pace setters at this year’s event. Now, heading into tomorrow’s sandy special with his ninth place starting position, Daniel will be focusing on doing all he can to pick up his third ever Dakar Rally stage win, tomorrow.