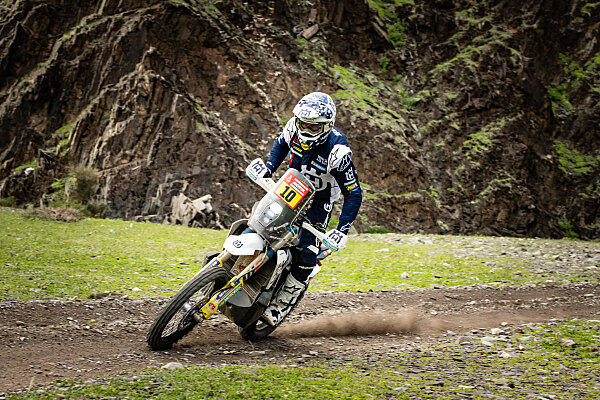 Husqvarna Factory Racing’s Skyler Howes has once again impressed at the 2023 Dakar Rally by racing to third place on what many riders are calling one of the toughest Dakar stages in recent years. Luciano Benavides also delivered a solid stage result, placing 12th and just over three minutes down on his teammate.

Following on from his strong result on the rally’s opening stage, Skyler Howes set off into the long 430-kilometre timed special on day two confident and eager to maintain his momentum. What Skyler and the rest of the riders faced was a huge stage with the first three quarters made up almost entirely of rocky, technically demanding tracks. Not only taxing physically, but the terrain was also hard on machinery. A steady pace through the special was necessary to minimise potential issues.

Pacing himself nicely, Howes slowly built his speed as the stage progressed, moving up from 24th on time at kilometre 104 to third place at the finish. The FR 450 Rally rider currently lies seventh overall, just over five minutes down on the race leader. Now, with organisers promising an equally tough stage three tomorrow, Howes will need to navigate accurately from his third-place start position and deliver another strong ride over the 447-kilometre special.

Luciano Benavides rode alone through most of today’s stage and was forced to gauge his own pace over the challenging tracks. The young Argentinian did an excellent job however, staying well within touch of the leaders to complete the long special four and a half minutes off the winner. Now with one of the longest days of the event ahead of him, Luciano is well-placed to attack stage three and move himself up the leaderboard.

Skyler Howes:“Today was super, super difficult in terms of being hard on the body, hard on the machine, and an incredibly long day. I was managing the day well, not pushing too hard and keeping a little in reserve for the coming days ahead. I was riding at a comfortable pace through the rock-strewn tracks early on, but when things opened up in the final 100 kilometres or so I put on a bit of a push because I thought I might well be behind by that point. As it happens, my pace was good, and I brought it home in third. There were no major mistakes on my end, just a couple of little moments, and the bike felt really good over all the different types of terrain. I’m starting third tomorrow, which isn’t ideal for the stage the organisers have promised, but I’ll do my best and aim to put in another solid day.”

Luciano Benavides:“It’s been a crazy day – super long and super tough – I don’t think I’ve ever felt so tired on the bike. What made it feel even longer is that I rode almost the entire day on my own, so it was difficult to judge how hard to push over all the rocks. At the end it worked out okay because I didn’t lose too much time on the leaders and I have a good start position for tomorrow, which could prove really important. The bike is good, my body is feeling good, I’m happy.”