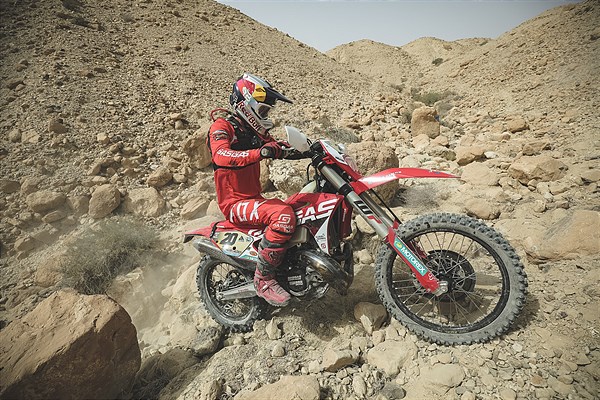 MICHAEL WALKNER CLAIMS EIGHTH AT MINUS 400.

There were mixed feelings for GASGAS Factory Racing’s supported rider Michael Walkner as he claimed eighth overall at round one of the FIM Hard Enduro World Championship – the Minus 400. On one hand, the young Austrian showed some of the best form of his career to mix it with the more established hard enduro regulars in the scorching Israeli heat. On the other, a missed section of the track resulted in a penalty that dropped the EC 300 rider down the final rankings.

Michael Walkner:“I had so many emotions during and after the race today. Sure, it was a super-tough event, and the heat was intense throughout all three days. I made a good start today and slowly passed a few guys ahead of me and was soon riding with Graham (Jarvis) and Alfredo (Gomez). We’d all take it in turns to lead, and it felt great that I was able to keep pace with these two. After the service point, there was a really steep uphill, and going up there I was in sixth and looking to move into the top five. I felt like I was riding the best race of my life! Unfortunately when I reached the finish, the organizers told me I had missed a small loop of the track and in the end that meant I dropped down to eighth. I was so disappointed, but it could have been worse. I’m looking forward to Serbia now in a few weeks’ time because I know I really have the speed to challenge for the podium now.”

It was hot in Israel – really hot! Covering three days of racing in the Dead Sea region, Minus 400 – a new event to the FIM Hard Enduro calendar – delivered a real challenge to all. As well as 40-degree-plus temperatures, the nature of the terrain in Israel made for some tough, exhausting racing. Despite the conditions being quite different to those seen at his home in Austria, Michael Walkner excelled in the desert and produced some excellent results throughout the event to ultimately claim eighth overall after his mixed Main Event.

Claiming ninth place on Tuesday’s Leonardo Urban SuperEnduro, Walkner went one better on the shortened Yochananof Desert Prologue on day two, where the final results decided the start order for Thursday’s Main Event. A strong start saw Michael sitting well inside the top 10, as he fought his way up through the pack, and by the midway service area, the GASGAS EC 300 rider was pushing on and threatening the top five. With the course becoming more technically demanding, Walkner dug deep and continued to move up through the ranks, making light work of the steep, rocky climbs. Arriving at the finish however, Michael’s celebrations were soon dashed when it was announced he had accidently missed a small section of the course. The resultant penalty dropped the 24-year-old down to eighth. Despite the setback, Michael is looking forward to carrying his speed into round two of the series, the Xross Hard Enduro Rally in Serbia, held from May 18-21.

Top GASGAS rider at the Minus 400 was the experienced Alfredo Gomez, riding competitively for his own team for the first time. Alfredo took his EC 300 to a highly commendable fourth-place finish after showing strong results throughout the three-day event.