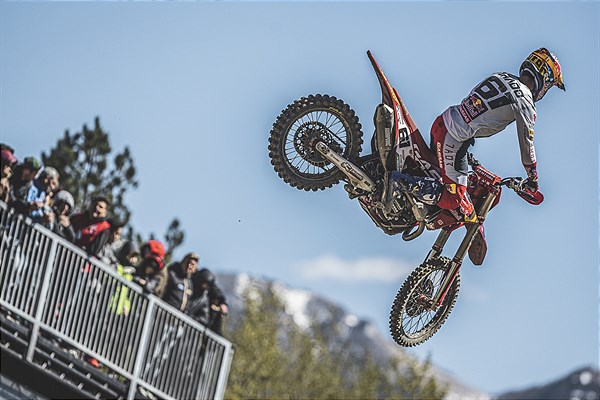 JORGE PRADO EXTENDS PODIUM STREAK AT THE MXGP OF TRENTINO.

JORGE PRADO PUTS MC 450F ON THE THIRD STEP OF THE MXGP PODIUM.

Just one week on from a phenomenal outing at the Grand Prix of Portugal, Red Bull GASGAS Factory Racing jumped into action on the hard-pack track of Pietramurata and claimed another trophy in front of a passionate crowd. Jorge Prado extended his streak of podium finishes to five and continued to gain momentum aboard his MC 450F.

Prado settled down in third in the opening laps of the first moto, before unleashing some impressive speed and edging closer to the top two. ’61‘ was the fastest man on track on multiple laps, thanks in part to some amazing lines in sector two, and ultimately came up just short of the runner-up spot, as he ended just a couple of seconds down in third when the checkered flag waved.

The MC 450F power helped Prado rip another holeshot in the final moto, but a mistake on lap one dropped him down the order. A strong charge saw him edge closer to the top three in the closing stages, but he had to settle for fourth at the end. A 3-4 scorecard put him in third overall at the Grand Prix, however, so he added yet another trophy to his impressive collection. Prado is still second in the standings, just 33 points behind the current championship leader.

Jorge Prado: „It was a tough weekend for me. The team did a great job this weekend and really made me comfortable. I was pushing for second in the first moto, but just could not pass and it was the same in the second moto. I was happy to get a clear track early in the second moto, but I made a mistake in the third sector. I think that would have been a very good moto – I was feeling good!“

Although Mattia Guadagnini did not put his MC 250F on the box at his home Grand Prix, he gave the Italian fans a lot to cheer about with some thrilling passes in both motos. Starting in twelfth in moto one, he sliced through the field to secure seventh place with just a few laps to go. The second moto followed a very similar pattern; he went from tenth on the first lap to fourth at the end and showed incredible pace along the way. 7-4 scores put him fifth overall at Pietramurata and helped him climb to sixth in the standings too.

For Simon Langenfelder, the Grand Prix of Trentino provided an opportunity to steady the ship after a hard couple of weeks. Taking third in qualifying was a boost for ‚516‘ and he followed that up with a very solid eighth in moto one. Tenth was the result that he claimed in moto two, which rounded out a consistent day of racing. Langenfelder was tenth in the overall classification at the end of the weekend too; he runs fourth in the championship.

Mattia Guadagnini: „I was feeling really, really good on the track this weekend. I showed what I could do in the second moto and did one of the best laps of the race towards the end; I just need to focus on the start. If I start in the top three then I know that I can go for the win. The best thing to come from this weekend was my speed.”

Simon Langenfelder: „My starts were okay today, but I did not quite have the speed in the motos. I will keep on working with the team and try to be better. I am not so happy with how today went but I did not have any big crashes and that is good. I will use this weekend off to rest and then go again in Latvia.“

The Red Bull GASGAS Factory Racing team will return to their base in Rome now, before travelling north to Kegums for the Grand Prix of Latvia on April 23/24.