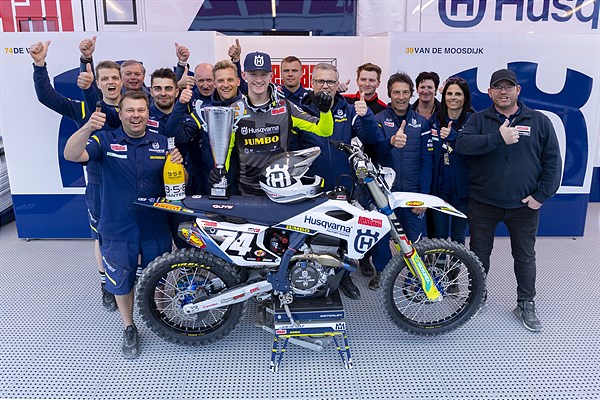 KAY DE WOLF CHARGES TO SECOND OVERALL AT THE MXGP OF TRENTINO.

Kay de Wolf has just placed his Nestaan Husqvarna Factory Racing steed on the podium at the fifth stop of the 2022 FIM Motocross World Championship, the Grand Prix of Trentino. De Wolf secured 6-2 moto scores on the hard-pack circuit of Pietramurata, Italy, and continued his run of positive form aboard his FC 250.

Finishing sixth in moto one was not a true representation of just how competitive de Wolf was around the fast-paced layout; he had to charge to that position from the lower half of the top fifteen and did so in such a calculated manner. ’74‘ was in a much stronger spot early on in the second moto, as he quickly moved into second and started to hound the race leader.

Despite such a valiant effort, de Wolf just could not find a way around the eventual victor and had to settle for the runner-up spot. Just four measly seconds separated him from the win at the end. Fortunately, that 6-2 scorecard was more than enough for second overall at the Grand Prix and helped push him into fifth in the championship standings.

For Standing Construct Husqvarna Factory Racing’s star, Brian Bogers, the Grand Prix of Trentino was a rather consistent outing. A poor start left him with a significant amount of work to do in moto one, but he put his head down and charged from the cusp of the top fifteen to eighth at the chequered flag. Taking advantage of a better start in moto two, Bogers ran as high as second before a mistake caused him to lose ground. Fifth was the position that he eventually secured and that left him in sixth overall at the conclusion of the weekend.

Pauls Jonass entered race day at the Grand Prix of Trentino with his focus on salvaging some points, as he struggled with a sickness. Showing plenty of heart, he was able to salvage a seventeenth in moto one before ending his day prematurely.

The Grand Prix of Latvia is next on the 2022 FIM Motocross World Championship calendar. Kegums is scheduled to host round six on April 23/24.

Kay de Wolf: „I am pretty happy to be back on the podium! I am still not back to one hundred percent, after Argentina and those tough few weeks, but this is a great step forward. I actually struggled with the track on Saturday, but we made some great changes and I felt so strong today. We will be back to battle again in Latvia.“

Brian Bogers: „I am feeling really good at the moment. Everything is going very well and I feel so strong on the bike. I think that it was possible to be on the podium today – the speed was there. I messed up the start in the first moto, but coming back to eighth was good. I cost myself some positions with a mistake in the second one, but the riding was still really good. I am happy with that.“