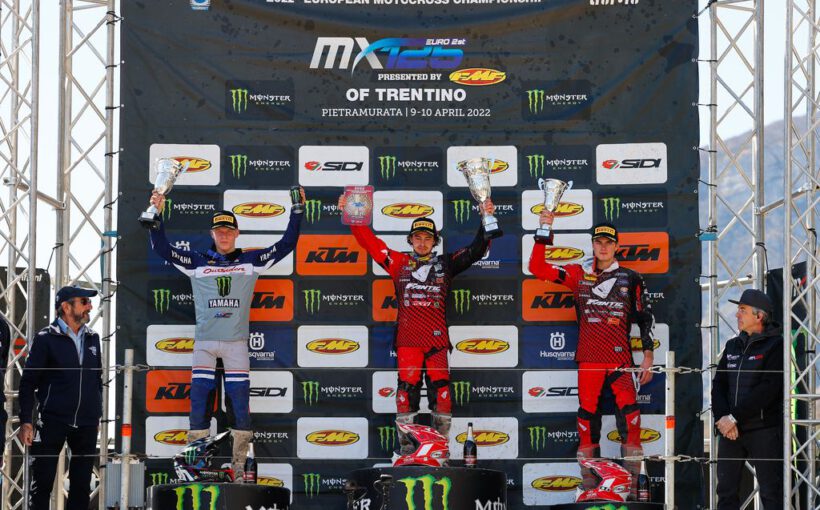 Fueri and Tropepe Win Second Round of EMX125 Presented by FMF Racing and EMX Open in Trentino.

Rounds two of the EMX125 Presented by FMF Racing and EMX Open Championships have concluded in Pietramurata with Fantic Factory Team Maddii’s Alexis Fueri and Millionair Racing Team’s Giuseppe Tropepe taking to the top step in their classes for the round of Trentino.

Fueri had the perfect weekend, celebrating a lot of firsts, including first race win, first 1-1 scorecard, first overall victory and first time leading the EMX125 Presented by FMF Racing championship. Meanwhile Tropepe enjoyed his own success, winning in front of his home crowd here in Italy as he celebrated his first win in the EMX Open category.

In EMX125 Presented by FMF Racing heat one, it was Alexis Fueri of Fantic Factory Team Maddii who led the way ahead of Julius Mikula, Elias Escandell of RFME GASGAS MX JUNIOR TEAM along with Maximilian Werner of KTM Kosak Team who was right there also.

Though Valk was very impressive in the opening lap as he was quick to make some passes and get himself into third. A lap later he also took second from Mikula as Yamaha Europe EMX125 MJC’s Karlis Alberts Reisulis got himself into fifth.

K. Reisulis then passed Elias Auclair for fourth and a lap later the Latvian was ahead of Mikula too as he got himself into third after a nice battle with the rider from Czech Republic. Auclair then dropped to 7th as Escandell and Matteo Luigi Russi of Tech 32 went by. Auclair eventually did not finish the last two laps of the race.

Back at the front, Fueri was looking comfortable as he extended his lead over his teammate Valk. Though further behind them, Mikula crashed out of fourth and got going again in around eighth.

The focused shifted back to the front of the pack in the closing stages, as Fueri made a mistake which cost him previous time and allowed Valk to close right in. In the final few laps, we were treated to a close battle between the teammates for the race victory, with Valk not backing down until the pair crossed the line, as Fueri held on to win the race by just 0.533 seconds! K. Reisulis was third ahead of Escandell and Russi.

In the second race, there was some commotion in the start as a few riders went down in the first corner, this included championship leader Valk along with the likes of J. Reisulis and Mikula. Though it was Holiver Brizio who led the way with Antonio Gallego of RFME GASGAS MX JUNIOR TEAM, Fueri and Vitezslav Marek just behind.

By the beginning of the second lap, Fueri was already in the lead, as K. Reisulis got himself into 10th after passing Jaka Peklaj of SIXTYTWO Motorsport Husqvarna. The Latvian then made two more swift passes as he moved into to 8th and continued his charge to the front.

By the fourth lap, K. Reisulis was already in fourth as he set his sights on Marek and Gallego ahead. Marek was looking faster as he pushed the Spaniard but could not find a way around him until K. Reisulis went by both and only then Marek could find his own opportunity to get around.

Meanwhile Valk was making good progress as he edged closer to the top 10, while Fueri was getting comfortable in the lead as he had more than a 7 second lead over K. Reisulis who was second.

Fueri’s lead only continued to grow and by the chequered flag the Frenchman was 18.556 seconds ahead as he secured another race victory. K. Reisulis was second as Marek held on to third ahead of Van Erp who made a great comeback from the back of the field to fourth. Mikula also made a good recovery as he fought back to fifth. Meanwhile Valk managed to fight back to eighth.

With the perfect 1-1 score, Fueri took to the top step of the podium, ahead of K. Reisulis and Valk. A strong weekend here in Trentino for Fueri also means that he now leads the championship by nine points over Valk who is second, as K. Reisulis sits in third.

Alexis Fueri: “It was a very good weekend. I took the pole position of my group, two holeshots, two wins, it’s amazing. But the season is long and the championship has just started, it’s nice to take the red plate but now I need to keep it and I will work for that”.