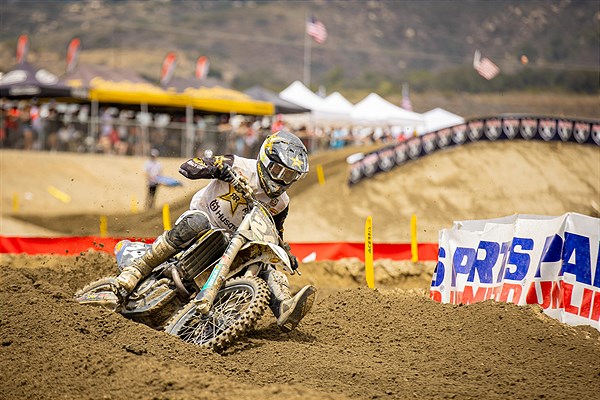 The Rockstar Energy Husqvarna Factory Racing Team returned to action on Saturday with the opening round of the 2022 AMA Pro Motocross Championship in Pala, California. With a third-place podium in Moto 1, RJ Hampshire fought through adversity in the second moto to finish just outside the overall 250MX podium in fourth. Fill-in rider Shane McElrath had a solid debut with the team in the 450MX class, capturing a top-10 overall finish at the Fox Raceway National.

Hampshire, the third-place qualifier, had a rough crash earlier in the day when he came together with another rider during the second practice session but he grinded through to line up for the first moto of the season. He didn’t get the best start in Moto 1 but he made a lot of early passes to climb from 11th to fifth halfway into the race. His valiant charge took him straight to the podium with about five laps to go, checking off his first podium appearance of the season right away. Positioning himself towards the front at the start of race two, he was making his way into the top-five battle when he came together with another rider in turn two and went down. Re-mounting in dead last, Hampshire put his head down and climbed back into the top-10 late in the race. With a last-lap pass for ninth, Hampshire was able to clinch fourth overall with combined moto scores of 3-9.

“It was a pretty crazy day and I was able salvage a fourth overall,” Hampshire said. “The day started off wild, I came together with someone in practice and hit the ground pretty hard but I was able to put that behind us. I feel like I was riding well today and we had really good speed, it’s not like we’re far off. I’ll work on getting a better start next weekend at Hangtown, and being up there and staying consistent.”

It was a good opening round for teammate Stilez Robertson, who managed a top-10 overall in the 250MX class with 10-11 finishes on the day. Robertson maintained a steady pace in both motos, setting a positive tone early in the season.

“Qualifying was a little rough for me,” Robertson said. “I just overrode, honestly, but it’s round one of 12, so my main goal this year is to be there every weekend and then I think the results will come. Going 10-11 for 10th overall is not the greatest day but it’s not the worst day. We’re going to keep plugging away.”

In his first race as a fill-in rider for the injured Dean Wilson, Shane McElrath immediately showcased his enthusiasm with a great start in Moto 1, just narrowly missing the 450MX holeshot as he tucked into a close second early on. Battling up front with the top riders, McElrath came away with 11th in the first moto. He picked up where he left off in the next moto, dicing back-and-forth with the same front-runners once again. Progressing on the bike with each lap he made, McElrath held his own late in the race to secure seventh in Moto 2 and 10th overall for the day,

“It was honestly a good start to the season,” McElrath said. “It was a quick deal that we put together and for me, it’s been a couple years since I’ve raced outdoors. I had a good feeling on the bike but I’ve not been racing in a couple months so there were a lot of questions I had for myself. I knew that once I got going, I could find a flow, I just had quite a bit of nerves today. First moto was tough but we had some changes for the second moto and regrouped. This is a very good opportunity in front of me and I don’t want to let it go to waste. I want to keep building on today. I think we have a lot of room to grow and I’m excited about it.”

Team rider Jalek Swoll had his day cut short after getting tangled with another rider at the start of the first 250MX moto. As a result, Swoll was unable to finish the race.