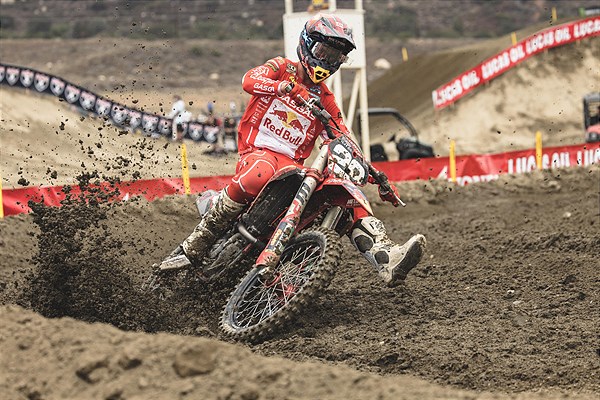 After a couple weekends off from racing, the Troy Lee Designs/Red Bull/GASGAS Factory Racing Team was back it for the start of the 2022 AMA Pro Motocross Championship in Pala, California. Kicking off the summer series with a solid foundation, Michael Mosiman highlighted the team’s efforts with a top-five overall in the 250MX class, while teammate Pierce Brown went 7-7 for ninth overall. In the 450MX class, Justin Barcia encountered a couple of starting issues that led to a ninth overall day but it’s all positive vibes heading into the second round next weekend!

With a packed gate of 40 riders who are all hungry to stake their claim on turn one, the outdoor motocross starts are nothing short of wild and getting through unscathed can prove to be a challenge, especially at the opening round. Coming off a rough crash during practice, Mosiman was looking for a fresh start when the gate dropped for Moto 1 but instead, he found himself caught up in a second-turn pileup that left him well outside the top-20 on the opening lap. Steadily charging through the pack, he broke into the top-10 with two laps to go and finished strong with a fighting ninth. Grabbing a clear start in moto two, Mosiman was able to jump right into the podium battle early on. Dicing back-and-forth up front, he overtook second for a few laps but a mistake dropped him to a fourth-place finish in the moto. With 9-4 scores, he locked in a top-five overall at the opening round.

Michael Mosiman: “What a day! You name it, I saw it, from a heavy crash in practice, to getting caught up in a second-turn pileup in the first moto and coming back to ninth. I had really good speed all day and I felt comfortable on the bike. In the second moto, I got a good start and was right there in the mix running second for a while and I felt good. To have the day that I’ve had, it’s good to get the first one over with and I think you can expect a lot more from me going forward. I’m excited for the season!”

For Brown, it was a steady start to the season with a pair of seventh-place finishes across the board. The Utah native ran inside the top-10 in both motos, making good progress throughout the day aboard his MC 250F. While ninth overall doesn’t tell the complete story, Brown’s consistency is a positive start to the 12-round championship.

Pierce Brown:“It was a pretty good day for me. I had two solid motos – nothing too flashy – with two sevenths. I made it through both motos with no crashes, passed guys and got good experience in the battle and that’s what I’ve been looking for the last couple seasons. All-in-all, I think we’re in a good spot for the season. I’m stoked for Hangtown next weekend!”

In the 450 class, Barcia found himself hindered by first turn chaos in both motos, forcing him to spend most of the day coming through the pack. After getting pinched off at the start of the first moto, he was buried as far back as 18th on the opening lap and he rallied his MC 450F through the field to secure a hard-charging eighth. It was a similar story in moto two but this time he got caught behind another rider in a second corner pileup. With his work cut out for him back in 20th, Barcia eventually climbed into the top-10 midway through the race, scoring another top-10 moto finish. Despite the ninth overall result, Barcia came away from Round 1 with a positive outlook and he looks to build at the next round.

Justin Barcia:“I felt good on the bike in qualifying practice. First moto, I got pinched on the start and I had to come from pretty far back, so it was a good charge through the moto and I felt pretty good. We made a few changes going into the second moto and I got off to a really good start and then in the second corner there was a bit of a pileup and unfortunately, I ended up going down in that, so I had my work cut out for me today. The results don’t really show the riding that I did – I did some really good riding – and I feel like the bike is in a good spot, my fitness is really good and I’m super motivated going into next weekend.”

The 2022 AMA Pro Motocross Championship will return on Saturday, June 4 with the Hangtown Motocross Classic in Rancho Cordova, California.

Championship Standings – After Round 1