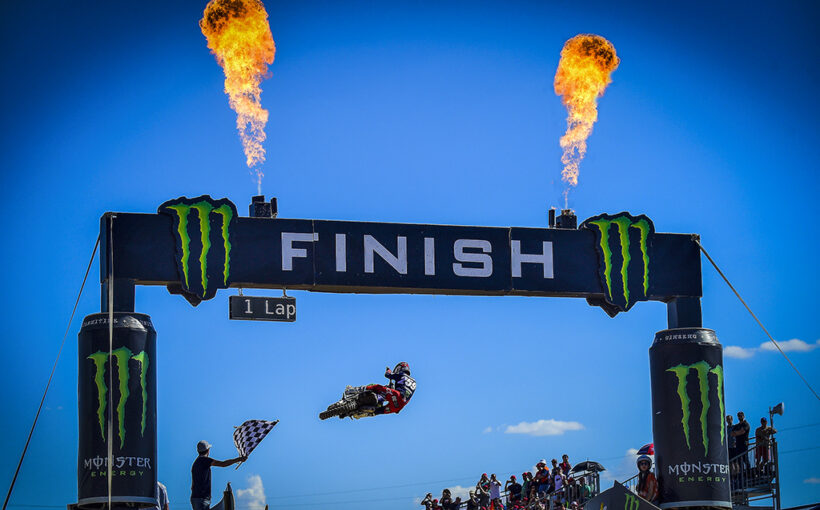 Despite temperatures well into the 30’s, both Coldenhoff and Vialle were able to keep their cool to secure pole position on the gate, ready for tomorrow’s races.

Alongside the MXGP and MX2 qualifying heats, we also witnessed the first races of the WMX and EMX125 Presented by FMF Racing, which were won by Big Van World MTX Kawasaki’s Courtney Duncan who made her return to racing after injury, while Fantic Factory Team Maddii’s Alexis Fueri was victorious in the 125cc category and will hope to repeat his success tomorrow for a strong overall result.

In the opening lap, Standing Husqvarna Factory Racing’s Pauls Jonass made some good moves as he got himself into third just behind Coldenhoff and Seewer.

By the beginning of the second lap, Coldenhoff was already in the lead, as Jonass had a moment and was passed by Prado and then had Team HRC’s Tim Gajser chasing him. Gajser made a mistake on a take-off of a jump which saw him land heavy off the track and crash of the result. The Slovenian got going fairly quickly, though was already down in 19th.

Prado then got around Seewer for second as he set his sights on Coldenhoff for the win on home soil.

Jonass then crashed out of fourth as he tipped over in one of the corners. The Latvian dropped to ninth as Coldenhoff continued to lead Prado, Seewer and Monster Energy Yamaha Factory Racing’s Maxime Renaux, along with Team HRC’s Mitch Evans.

Prado brought the gap down between him and Coldenhoff to less than a second as it looked like he was going to make a move, but the Dutchman was able to respond immediately to give himself some breathing room.

On lap eight, Renaux got by Seewer for third as Gajser made his way into 12th in the closing stages and then into 11th by the chequered flag.

Coldenhoff went on to claim his second qualifying race win of the season, crossing the line 4.095 seconds ahead of Prado, Renaux and Guadagnini who made some nice passes in the closing stages.

Glenn Coldenhoff: “I felt good straight away from this morning. The track is less tricky than last year which allows us to use more lines this time around but still it is easy to make a mistake. I pushed hard in the beginning of the race, I think I started in fourth or third and made my way up to first quite quickly and then rode my own rhythm and I look forward to tomorrow”.

In MX2 qualifying race, it was Red Bull KTM Factory Racing’s Tom Vialle who led the way from early on in the heat as Guillem Farres of Rath’s Motorsports got off to a stellar start after getting around Monster Energy Yamaha Factory Racing’s Thibault Benistant and Jago Geerts.

While trying to push for the lead, Farres crashed and dropped down the order, as Red Bull GasGas Factory Racing’s Simon Längenfelder was looking to stick with the top three.

Vialle led the way as Mike Gwerder of WZ Racing Team was running well in fifth, all while F&H Kawasaki Racing’s Kevin Horgmo pushed Jorgen-Matthias Talviku from Sahkar Racing for sixth. The Norwegian was quick to make the pass shortly after.

Team Ship to Cycle Honda SR Motoblouz rider Stephen Rubini then crashed out of ninth as further up the field Längenfelder began to close in on Benistant. The Frenchman had no room for error as Horgmo was right behind too after getting by Talviku and Gwerder.

Benistant was looking to respond to Längenfelder’s threat, though the German was able to read it well and find the perfect opportunity to pass him for third. Geerts was still in second and pushing Vialle who remained unbothered.

In the closing stages we saw Big Van World MTX Kawasaki’s Mikkel Haarup push Benistant for fifth, though the Frenchman was not going to let another position slip by and held on until the end.

Despite maintaining a close gap for much of the race, even with mistakes, Vialle was able to keep Geerts behind him to win the race, as Längenfelder crossed the line in third ahead of Horgmo and Benistant.