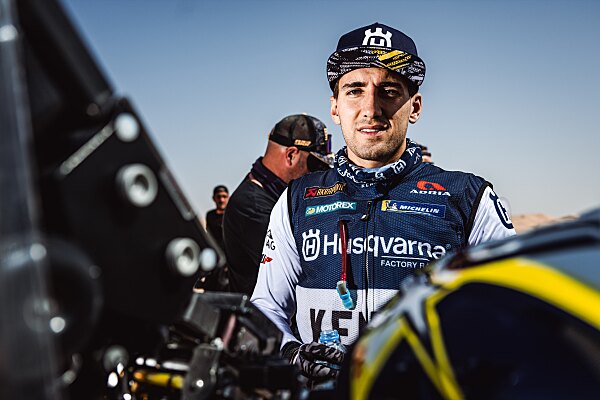 LUCIANO BENAVIDES ALL-SET TO TAKE ON THE 2022 ATACAMA RALLY.

HUSQVARNA FACTORY RACING RIDER BACK IN ACTION AT ICONIC FIVE-DAY RALLY IN CHILE.

Well-rested and focussed on success, Luciano Benavides will soon return to competitive action at the 2022 Atacama Rally. In strong form last time out at round two of the FIM Rally-Raid World Championship, the Husqvarna Factory Racing rider hopes to secure a strong result at the Chilean event before heading back to Europe for more testing ahead of the Rally du Maroc on October 1.

Showing good pace at both the Dakar Rally in January and the Abu Dhabi Desert Challenge in March, Benavides is arguably in the best form of his career. By securing a stage win in Abu Dhabi, and successfully overcoming the challenge of opening three of the five stages, the Argentinian racer proved he is able to mix impressive speed with accurate navigation – key skills in the hunt for rally success.

Now, despite the Atacama Rally not featuring in the FIM Rally-Raid World Championship for this year, Luciano still plans to deliver a strong result at the event and build on his speed and confidence ahead of the final two rounds of the championship in October. The race in Chile is ideal for both training and set-up purposes due to the barren nature of the Atacama Desert, which provides the perfect testing ground for the updated FR 450 Rally.

Starting Sunday, August 28, and based around the Chilean city of Iquique, the 2022 Atacama Rally comprises five full days of racing, covering over 1,700 kilometres, set out in looped stages all starting and finishing at a single bivouac. Known as one of the driest deserts on the planet, the Atacama will provide plenty of challenges for Luciano due to its mixture of barren tracks and steep, sandy dunes.

Luciano Benavides:“I’m really excited to do the Atacama Rally. I think it’s a really good one for training because we’ve only done the Dakar and Abu Dhabi so far this year, so it will be good to do some racing before heading to Morocco in just over a month’s time. Although I’ve been able to do a lot of training, both at home in Argentina and with the team, it’s always different when you are in an actual race situation. It will feel good to be back in the desert racing again, but I also want to keep working on my navigation as well. Although I will definitely try my best to fight for the win, the main focus will be to train for the next two races of the world championship and for the Dakar next January. Since the last race in Abu Dhabi, we’ve done some good testing with the team, so I’m really happy with the bike and looking forward to seeing how it performs in Chile. While we have had a break from racing, I’ve been able to work on my fitness and strength, and build my weight a little, too. Starting with the Rallye du Maroc in October, we then have the Andalucia Rally soon afterwards, which is then followed by the Dakar – it’s a lot of tough races in quite a short time, so it really takes it out of you physically. It’s going to be a tough end to the year with a lot of races and training, but I’m really looking forward to it and can’t wait to get started.”