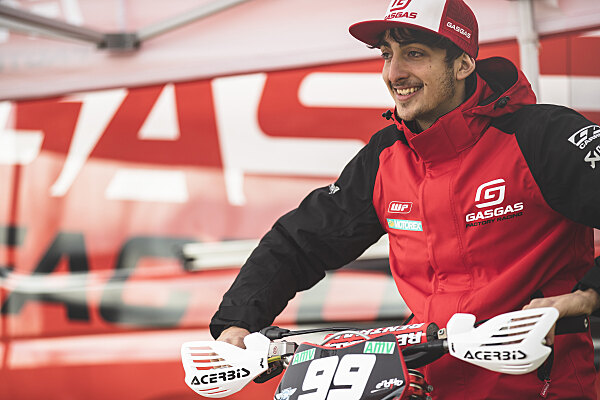 Leading Team Italy in their World Trophy title defense, GASGAS Factory Racing’s Andrea Verona is fired up for the 96th edition of the FIM International Six Day Enduro (ISDE), held in France. The young Italian knows exactly what it takes to climb up onto the top step of the ISDE podium, having won the Enduro1 category last year while also playing an instrumental role in ensuring Italy topped the illustrious World Trophy team competition!

Andrea Verona:“My season up to now has been really good. I was able to claim the Enduro1 title with one round to spare, and I still have a good lead in the EnduroGP standings. It definitely helps to be able to arrive at the Six Days having already won the E1 title. It’s not ideal for us riders to have the ISDE in the middle of the championship, but it’s like this and for now we have to focus on the Six Days. Obviously, I want to go into the event and give 100%. It was amazing to win both my class and the World Trophy last year and the goal is to help Team Italy to keep hold of that trophy. I think we have a good team for this year, but the competition is as high as ever, so I think it will be a really good fight. I love the typical French tests, and although it looks like it will be a tough event this year, I think it should suit me well. Time to give full gas – let’s go!”

Virtually unbeaten in this year’s FIM Enduro1 World Championship, Verona won every day except one on his way to claiming the title. On the day he didn’t win, he came second! It’s this consistency that has also earned the EC 250F rider the lead in the overall EnduroGP category, where he sits at the top of the standings with a sizeable 28-point advantage.

Looking to carry that speed and consistency to the ISDE, Andrea knows the task ahead of him is by no means small, but with a strong Italian team behind him, the GASGAS star is 100% focused on the win.

The 96th edition of the FIM International Six Days Enduro takes place in Le Puy-en-Velay, France, from August 29 to September 3. For six straight days, riders will face some of the toughest tests enduro has to offer, and cover over 1,300km on route to the checkered flag following Saturday’s final motocross races.