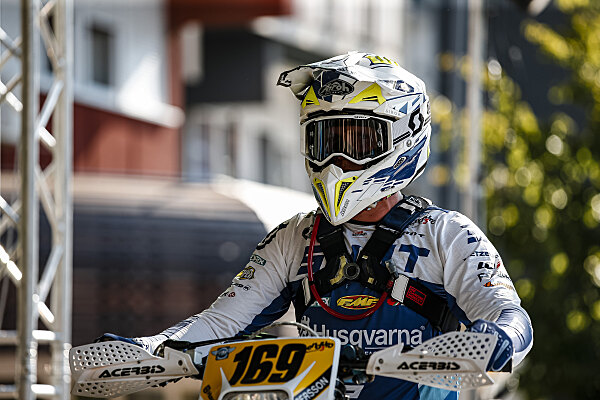 Mikael Persson is all-set to take on the 96th edition of the FIM International Six Days Enduro (ISDE), held in France. With shakedown complete and all special tests walked, the three-time Swedish Enduro Champion is looking forward to riding for his national World Trophy team while also aiming to repeat the individual podium success he achieved at the 2021 event.

Representing Husqvarna Motorcycles on its return to EnduroGP competition in 2022, Mikael Persson has impressed over the course of the season, claiming nine Enduro3-class podiums from 12 days of racing, including a double win at the GP of Italy. The 27-year-old currently leads the E3 standings going into the final round in Germany in just over six weeks’ time.

Winner of the Enduro Youth Cup in 2015, Persson then spent several years contesting his national championship where he enjoyed considerable success, claiming the Swedish title in 2018, 2019, and 2021. However, it was his performance at the 2021 ISDE that secured his return to the world championship paddock.

Riding as a privateer in the 2021 ISDE, Persson immediately felt comfortable on the hard Italian dirt and began to turn heads, delivering multiple top-six results as well as going fastest on day three. Completing the tough event in third overall, he also placed a highly creditable runner-up in the hotly contested Enduro1 category.

Now, with full factory backing behind him and riding his proven TE 300, Mikael hopes to equal his podium success of last year and help push his Swedish national team into contention for the top places in the coveted World Trophy competition.

The 2022 FIM International Six Days Enduro takes place in Le Puy-en-Velay, France, from August 29 – September 3. The historic event comprises five full days of special test racing in the hills and mountains of south-central France before the final motocross test on Saturday. In total, riders will cover more than 1,300km over six tough days before reaching the finish.

Mikael Persson:“I’m really looking forward to racing the ISDE, it’s definitely going to be tough to repeat the results from last year, but I’m fully focused on doing so. It’s been a pretty hectic season so far for me, from joining the factory team and getting to know the bike to fighting for the Enduro3 title. I’ve been really pleased with my performance to be honest – I’ve just been taking things step-by-step, and the speed has been there. Recently I’ve been able to get back home for a small break which has helped a little ahead of the Six Days. My plan is to push as hard as I can and hopefully win the E3 category. On scratch, even a top-five would be a dream come true for me – there are so many riders who will be fighting for the podium, I definitely think it’s going to be a tough one this year. I feel that Sweden has a good Trophy team this year and if everything goes well for sure we can fight for the podium.”