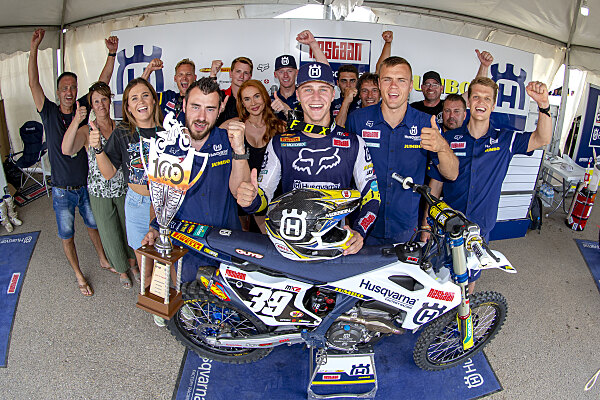 The Grand Prix of Turkiye, held on the hard-pack layout of Afyonkarahisar that was introduced four seasons ago, hosted the grand finale of the 2022 FIM Motocross World Championship earlier today. The Husqvarna Factory Racing stars performed well in the humid conditions; Roan van de Moosdijk recorded the strongest result via 4-3 scores in the MX2 division.

Moosdijk has shown some impressive pace since his return to racing and was desperately trying to achieve a podium ranking before the end of the campaign. ’39‘ delivered in Turkiye! Pushing to fourth in moto one was not an easy task, as he completed the first lap in the lower half of the top ten, but he persevered. The second moto was similar to the first – he had to make more passes to progress to third in the moto and secure the same ranking in the overall classification. A good haul of points helped him climb into thirteenth in the championship standings too, despite missing eleven rounds with an injury.

Kay de Wolf strung two impressive motos together at the Grand Prix of Turkiye. The first moto was certainly his finest work, as he went with the series leaders and placed himself in a duel for the runner-up position. ’74‘ eventually took third in the moto and then had another brilliant start in moto two, thanks to the power in his FC 250. Sixth was the ranking that he eventually took and that put him fourth in the overall classification at the finale. De Wolf progressed to sixth in the final championship standings as well, despite missing three events earlier in the year.

The Grand Prix started with a lot of promise for Brian Bogers; he started proceedings by posting the fourth-fastest time in free practice. ‚189‘ struggled to bring that speed to the motos, unfortunately, but he did put his FC 450 into the top ten in moto one. Tenth was his result in that first stint and then he followed that up by securing the same result in the second moto. Unsurprisingly, 10-10 scores put him tenth in the overall classification.

Sadly, Pauls Jonass of the Standing Construct Husqvarna Factory Racing team was unable to take part after suffering a thumb injury. ’41‘ ended ninth in the premier-class championship standings, with a season-best finish of second overall at his home Grand Prix in Latvia.

Roan van de Moosdijk: „It was really good in the end! I worked my way up to fourth in moto one with some really good lap times. I was happy with that and knew that it was possible to get on the podium. I knew that I could get a trophy here, so I am really happy. It was emotional! My shoulder injury was the biggest injury that I have had, so ending the season in this way is great.“

Kay de Wolf: „I had a really good start in the first race and followed the top two quite easily! I was happy with that. I pushed really hard in the second moto and ended up in sixth. Overall, it was a positive weekend. I felt good and had a lot of fun on my FC 250. This is a big improvement when you compare it to what I did in France.“

Brian Bogers: „I always want to be closer to the front than this, of course, but my starts let me down again. I was happy with my pace and my riding though; I know that I would have been closer to the front if I had better starts. It has been a very good season, overall, with a lot of career milestones. I cannot thank the entire Standing Construct Husqvarna Factory Racing team enough.“

Kay de Wolf of Nestaan Husqvarna Factory Racing turns his attention to the Motocross of Nations now, as he will represent The Netherlands at the prestigious event on September 24/25.