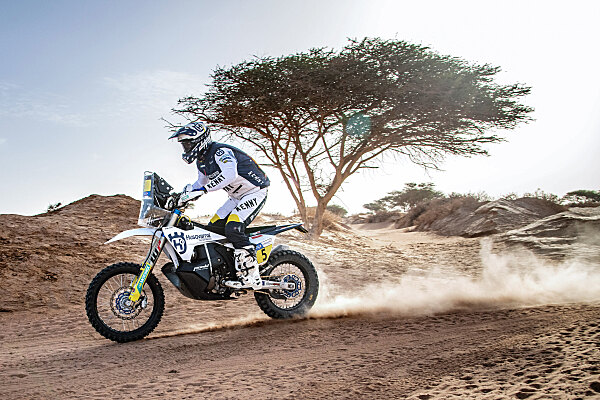 Husqvarna Factory Racing’s Skyler Howes and Luciano Benavides have safely completed stage four of the Rallye du Maroc in sixth and eighth places respectively. Following his stage win on day three, Benavides did an incredible job of opening the first 300 kilometres of today’s 350-kilometre stage, losing the absolute minimum of time to the chasing pack.

With the two Husqvarna Factory Racing riders setting off first and second into today’s special – the longest of the event at an exhausting 346 kilometres – the FR 450 Rally riders planned to work together to share the navigation and opening duties from the front.

Pushing right from the start with the goal of catching his teammate, Skyler Howes was able to stick to a strong pace and was lying fifth on time one-third of the way through the stage. However, with teammate Benavides almost matching him for speed and navigating well over the fast terrain of the special, Howes didn’t catch the Argentinian until after kilometre 300.

Taking the lead for the final 50 kilometres, Skyler reached the finish line having secured a sixth-place result, eight and a half minutes down on the eventual stage winner. Despite losing time, Howes still lies second in the standings and will enjoy an advantageous start position for Thursday’s final stage of the event.

Completing the special just under four minutes down on his teammate, Benavides was nevertheless pleased with his performance throughout the gruelling stage. Navigating almost the whole timed special on his own from the front, without making any major errors, demonstrates the quality and form of the young Argentinian. Luciano now lies fourth overall, and will also be aiming to deliver a solid ride on the Rallye du Maroc’s final stage to put himself in contention for an overall podium position.

Stage five of the Rallye du Maroc, the final day of the event, leads riders north again from Tan-Tan back to Agadir. Totalling 379 kilometres, the stage includes a timed special of 290 kilometres.

Skyler Howes:“Today was tough, because when you set out near the front, you’re almost always guaranteed to lose a bit of time. But with Luciano and myself starting first and second, we had this game plan to ride together and share the opening of the stage. The problem was Luciano’s pace from the front was so fast it took me most of the stage to catch up to him. I was able to lead the final 50 kilometres or so and that helped, I think. It’s frustrating to lose the overall lead in the rally, but we have a good starting position for tomorrow, so I’ll give it everything I have and hopefully come out with a good result.”

Luciano Benavides:“Today was a really nice day for me in this rally. I didn’t think I would open so much, I think I led for the first 300 kilometres, so I did a pretty good job I’d say. I felt really good and was able to focus on my navigation while keeping up a good speed and I didn’t think about the others behind. The stage was really fast in some sections, but I think those sort of tracks suit me and my style. Also, the navigation was quite tricky, but I was able to get through without making any big mistakes. Overall, the race so far has been really positive for the team, it has shown we have the pace and are well in the fight for the podium. I’ll try my best tomorrow on the final stage and see where we end up.”