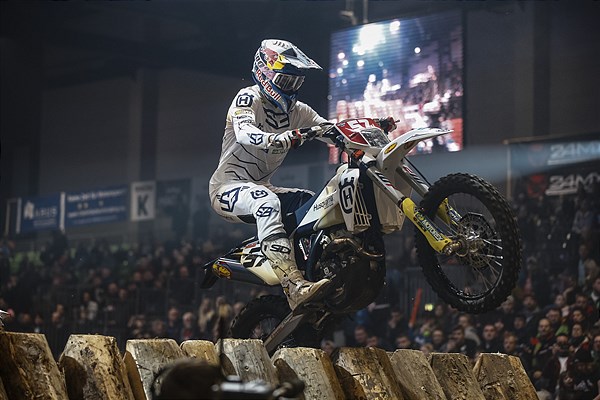 HUSQVARNA FACTORY RACING’S SUPERENDURO WORLD CHAMPION SIGNS OFF ON A PERFECT SEASON WITH FIFTH OVERALL WIN OF THE CHAMPIONSHIP.

Drawing his participation in the 2022 FIM SuperEnduro World Championship to a close at round five in Germany, Husqvarna Factory Racing’s Billy Bolt has delivered another dominant display of riding, clinching the overall win in Riesa. Having secured the world title last night at the same venue, Bolt’s victory ensured a clean sweep of podium results across the five rounds. Fighting tooth and nail, teammate Colton Haaker ended his championship campaign in third overall.

Less than 24 hours after winning the 2022 SuperEnduro World Championship in Riesa, Bolt was back inside the stadium on Sunday afternoon for the fifth and final round of the season. A reversed course offered new motivation for Billy as he aimed for an unbeaten run of overall victories this season.

Posting the fastest time in SuperPole on his FE 350 set the tone for what was to follow. Immediately taking the lead on the opening lap of race one, the British rider soon checked out. Comfortably attacking all of the biggest obstacles, he eased away from the field to take a commanding 27-second margin of victory.

In race two with the start order reversed, Billy eased his way around the first corner before beginning his fight forward. Up to third on lap three, he put his Husqvarna into the lead on lap five and controlled proceedings from there to take his second win.

Determined to sign off his season on a high, Bolt gated third in race three but was leading by the end of lap one. Clocking in a series of near-perfect laps, he claimed the race win to end his championship campaign on the top step of the podium for the fifth time in as many rounds.

In what’s been an incredible year, Billy not only won the world title, but won all five SuperPole qualifications and took 14 race wins from a possible 15. He now sets his sights on successfully defending his FIM Hard Enduro World Championship crown, beginning with the season opener in Israel on April 5-7, in less than three weeks’ time.

Entering the final round of the championship tied on points for second, Haaker was focused on making it a Husqvarna 1-2 in SuperEnduro. However, things didn’t quite go to plan for the Rockstar Energy Husqvarna Factory Racing rider with some small mistakes proving more costly than expected.

Third in SuperPole, he then raced to third in the opening race. Quickly getting to the front of the field in race two, Colton led until lap four before giving way to Bolt. With second looking likely, a small error saw him slip to third on the final lap. Putting in his best showing of the afternoon, Haaker raced hard in race three, hoping luck would fall his way. Battling with rival Jonny Walker, Colton eventually took second place. Although not quite enough to claim the championship runner-up position, the American nevertheless did enough to secure a well-deserved third overall in the final standings.

Billy Bolt:“It’s pretty much been the perfect season and to cap things off with a clean sweep here in Riesa is brilliant. I’ve really enjoyed things this weekend. Winning the title last night left me pretty relaxed coming into today and I felt like that showed in my riding and I delivered one of my best performances of the season. To win all but one race this year is pretty special too. It’s been an amazing championship, which has gone so well from the start. The races in Hungary weren’t easy, and I’m a little frustrated that I got beaten in that first heat there, which is my only loss all year. From my team, family, friends, and everyone around me that supports me, I can’t thank them enough. I’ll try to let this moment sink in as champion and then look to getting focused and back on the 2-stroke for Hard Enduro next month.”

Colton Haaker: “Coming into the final night of the series tied on points with Jonny (Walker) I knew what I had to do. The track was really good, and I felt good, but I just made a silly mistake in the opening final, which put me a long way back. I tried as hard as I could to catch up, but it didn’t really happen. The second moto was going great, I was second into the final lap, ahead of Jonny, and I got into it with another rider. I didn’t want to take any risks, which meant that I basically meant that I needed to win the final round. And with Billy riding so well that’s not easy to do. I finished second in the race, third in the championship. It’s been a fun series. Husqvarna have done great, and congrats to Billy for an incredible championship.”