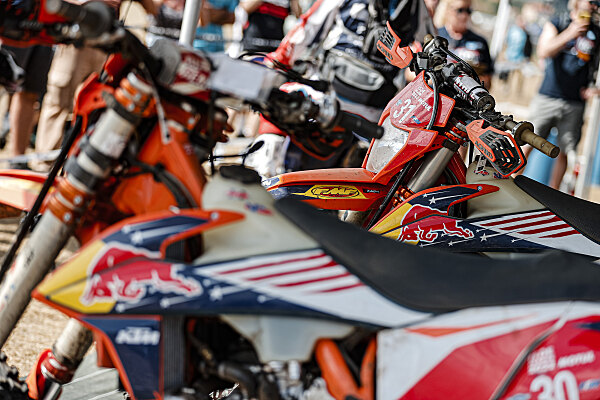 AMERICAN KTM RIDERS OFF TO A STRONG START AT 96TH RUNNING OF ISDE IN FRANCE.

LE PUY-EN-VELAY, France – With KTM riders leading the charge in all three classes, the U.S. World Trophy Teams have successfully completed day one of the 2022 FIM International Six Days Enduro (ISDE) in Le Puy-En-Velay, France. KTM’s Brandy Richards led her team to a strong title defense in the Women’s World Trophy division, with first-time ISDE competitor Korie Steede (KTM) finishing an impressive second on day one. FMF KTM Factory Racing’s Dante Oliveira led the Americans to a strong fourth-place start in the World Trophy division, with teammates Kailub Russell and Josh Toth each contributing solid scores for a competitive start to the week.

With only 26 seconds separating the top four countries, the U.S. World Trophy Team has positioned themselves right in the mix after day one. As the only foursome to all finish within the 33-minute mark, the Americans delivered a consistent performance to finish a fighting fourth on the opening day. It was FMF KTM Factory Racing’s Dante Oliveira who highlighted the team’s efforts in his World Trophy debut, finishing a slight .15 seconds ahead of veteran teammate, Kailub Russell, after the first five tests. Oliveira slated three top-10 test finishes to position himself ninth overall after day one, with Russell finishing close in tow for 10th. FMF KTM Factory Racing’s Josh Toth had a slow start to the day but he finished strong with a pair of eighths in the last two tests. Toth sits 19th overall after day one, just a few spots behind American teammate Layne Michael (Yamaha), in 13th.

Dante Oliveira:“It was a solid first day. I finished inside the top-10, which is not as far up as I would like to be but it’s better than year’s past, so improvement is always good. The tests were fun! I didn’t really have any major mistakes and I kept it on two wheels, so just looking forward to improving.”

Kailub Russell:“I had a solid start to the week. It was nothing spectacular, but very consistent and smooth. We’re hoping to pick up the pace tomorrow as a team and bridge this gap to the leading teams!”

Josh Toth:“Day one went okay for me. I was pretty uncomfortable early in the day but I stayed off the ground. I made some small adjustments to the bike to make it squat and turn better for the last two tests and that made a huge improvement. I’m feeling fresh and excited to keep improving tomorrow.”

JUNIOR WORLD TROPHY TEAM (JWT)
It wasn’t an ideal start to the week for the U.S. Junior World Trophy Team as a whole but KTM-supported rider Mateo Oliveira forged on to finish sixth-best in the JWT category with a strong performance in his ISDE debut. His American teammate, Austin Walton (Husqvarna Motorcycles), had a stand-out ride in the opening test for seventh overall, and he remained steady to finish just behind Oliveira in eighth for the day. Unfortunately, Junior teammate Cody Barnes (Honda) suffered a mechanical issue early on that has resulted in the U.S. squad no longer in the running for a Junior team result.

Mateo Oliveira:“It was a little bit of a slow start for me and definitely not where I want to be all week, but it’s my first time here at Six Days and I’m learning as I go. I’m just looking forward to the coming days to improve.”

KTM-Supported riders Brandy Richards and Korie Steede each had a strong start to the week in the Women’s World Trophy category, finishing 1-2 individually to place the U.S. team almost four minutes ahead after the first day. As the reigning Women’s Champion, Richards set the pace from the start, topping all five tests in the class. Steede made an impressive debut into the event as the closest finishing rider to her teammate Richards. Rachel Gutish (GASGAS) also contributed a solid time to the U.S. team’s efforts, finishing sixth overall on the opening day.

Brandy Richards: “Day one went great! We’re sitting first as a Women’s team and I’m super stoked that we were all super consistent today. I had a lot of fun in the day. The tests were actually a lot more fun than I thought they were going to be and the transfers were incredible with some great views, so it was a great day.”

Korie Steede: “Day one is in the books! All last week I was just keeping myself calm and then I think the nerves finally hit me this morning. I had some good tests and about halfway through the day, I finally started to feel pretty comfortable. We’ll just build on that and now I know what to look forward to for tomorrow.”

Racing from the 2022 International Six Days Enduro will resume on Tuesday, August 30 with day two of six from Le Puy-En-Velay, France. For updates on KTM riders, follow along on Instagram and be on the lookout for daily recaps on all of the U.S. teams. For a list of complete results, please visit https://fim-isde.com/2022-results/.