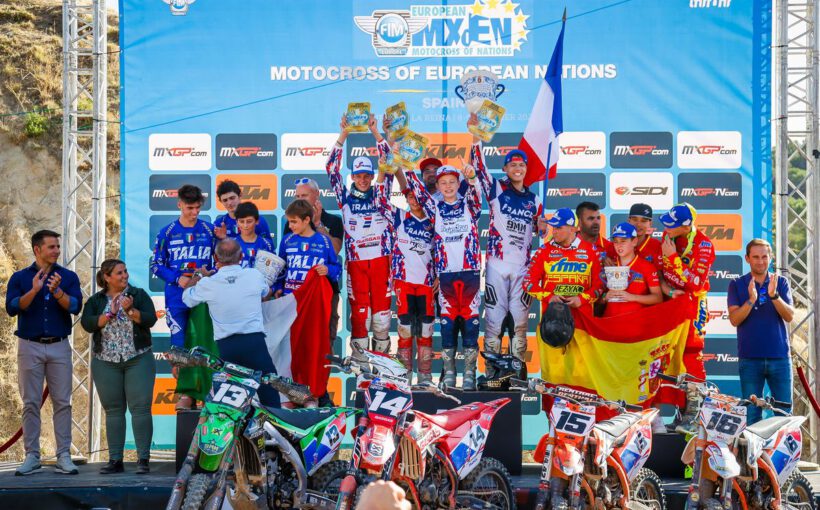 The 2022 Motocross of European Nations has concluded in Talavera de la Reina as Team France and Team Spain were crowned this year’s champions in the MXoEN and WMXoEN categories!

The morning of the race began with an opening ceremony with speeches given by José Ramón Garcia Vice President of FIM Europe, Jesús Bermúdez President of Motoclub Talavera and Patricia Maskarova Infront Moto Racing’s MXoEN general manager who also handed a special plaque to Mr Jesús Bermúdez as thanks for organising such a fantastic event.

At the end of the opening ceremony, the national anthem of Spain was played before everyone shifted their focus onto the racing.

Each group rode a total of two races, as they fought for the highest positions, in order to take the least amount of points, with the worst result not being counted. The grand total was added up and the team with the least number of points were declared the winner!

In the first EMX125/EMX250 race the holeshot went to Team Italy’s Valerio Lata who was the leading rider for the first three laps of the race. Team Slovenia’s Jan Pancar briefly led before being pushed back as Team France’s Quentin-Marc Prugnieres took over first place as Team Spain’s Gerard Congost moved into second.

Lata dropped back to fourth and then eventually did not finish the race due to a bike problem, while Prugnieres went on to win ahead of Pancar who fought back to second, while Congost and Anton Nordström Graaf of Team Sweden rounded out the top five.

In race two, it was Congost who took the holeshot ahead of Lata and Pancar, while Prugnieres started in fourth.

Congost led for six laps before being passed by Pancar, and then four laps later, the Spaniard was also passed by Prugnieres, as Lata dropped down the order to fifth where he eventually finished.

Pancar won the race ahead of Prugnieres, Congost and Nordström Graaf while Lata rounded out the top five in the group.

A lap later, Alvisi passed Faure to move into third all while Mantovani was able to take over the lead from Maindru, but only for a lap, as the Frenchman got himself back into the lead by the fifth lap and maintained first until the end of the race.

By lap seven, Alvisi managed to get around Mantovani for second, but just three laps later was passed back by his fellow countryman. In the end, Maindru was the winner ahead of Mantovani, Alvisi, Faure and Juan Izaguirre of Tram Spain.

In race two, the holeshot went to Faure, as Mantovani and Maindru pushed the Frenchman from behind. The top three opened up a nice gap to the rest of the field, as they focused on the battle among each other.

By lap five, we saw a change for the lead as Mantovani was able to take control of the race, but the trio continued to battle for much of the race.

With two laps to go, Mantovani looked well in control, though Maindru was keen to push for the win from third on the final lap, though was not successful. In the end, Mantovani was the winner ahead of Faure and Maindru, while Viktor Leppälä of Team Finland and Enzo Badenas of Team Spain were in the top five.

In WMXoEN race one, it was Team Spain’s Gabriela Seisdedos and Daniela Guillen who got off to a strong start, with Seisdedos taking the holeshot. Team Netherland’s Lynn Valk was nestled in between the pair, before Guillen found her opportunity to get by both and take over the lead by the second lap.

After starting in the mid-field, Team Denmark’s Sara Andersen worked her way up the order and on lap six was in third behind Valk. But Guillen was in control around 12.521 seconds ahead of Valk who remained second.

In the end, Guillen took the race win ahead of Valk, Andersen, Team USA’s Jamie Astudillo and Malou Jakobsen of Team Denmark.

In the second race, it was Andersen who took the holeshot that time around with Valk, Guillen and Seisdedos just behind. Within the first two laps, the top three pulled away from the rest of the field, as Guillen passed Valk on lap three.

By lap six, Andersen began to fade which worked to Guillen’s advantage and just three laps later the Spaniard was able to pass for the lead. Guillen won the second race, taking a perfect 1-1 score for Team Spain, while Andersen crossed the line in second, putting Team Denmark on the third step of the podium, while third was Valk for Netherlands as the finished second overall on the podium and failed to defend their title this time.

Team Spain’s Daniela Guillen and Gabriela Seisdedos celebrated big with their team and local fans as they crossed the line as the 2022 Women’s Motocross of European Nations Champions!