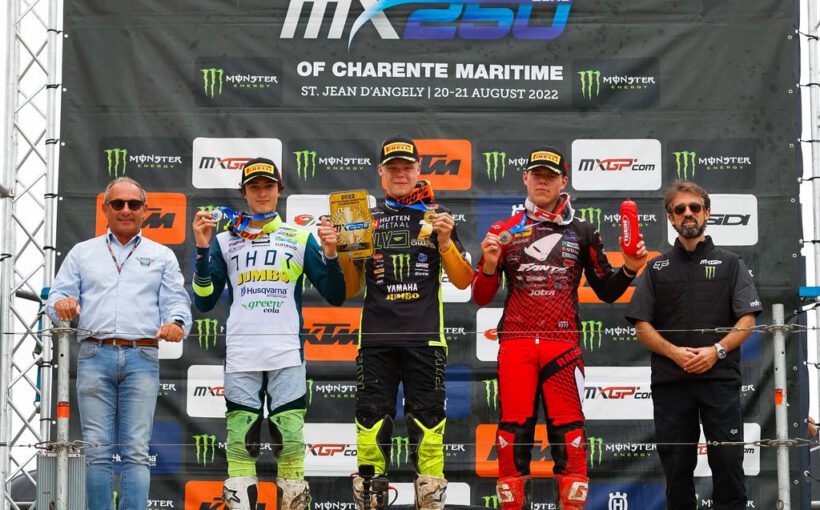 The round of Charente Maritime concluded the 2022 campaign of the EMX250 Championship that saw Hutten Metaal Yamaha Racing’s Rick Elzinga wrap up the title in the opening heat, while Jumbo BT Husqvarna Racing Team’s Lucas Coenen ended his season in the best way possible with a 1-1 scorecard and claimed his third overall win of the year as well as the silver medal in the standings!

A strong result for L. Coenen also meant that he secured the silver medal in the championship standings while Fantic Factory Team Maddii’s Cornelius Toendel dropped to third after an unlucky first race, in which he scored 0 points.

In the opening race of the weekend, the holeshot went to Fantic Factory Team Maddii’s Hakon Osterhagen who led his teammate, Cornelius Toendel. Toendel was in a crucial position and needed every point possible to try to keep his championship hope alive, though that all ended quickly after he banged bars with another rider going down one of the downhills and crashed.

Hutten Metaal Yamaha Racing’s Rick Elzinga started in around sixth, while Toendel picked himself up in 34th.

On lap three, Osterhagen crashed out of first place as L. Coenen took over the lead. Just behind him, Grau began to apply pressure onto Martinez for second as the two battled for almost the entire race.

Osterhagen dropped even further down the order to 10th as the battle inside the top five intensified between the likes of Braceras, Gerard Congost of Jezyk Racing Team, Quentin-Marc Prugnieres of 9MM Energy Drink Bud Racing Kawasaki for fourth.

TBS Conversions Camden McLellan was looking to join the battle too, but it was Prugnieres who came out on top as he also got by Grau on the final lap.

L. Coenen won the race though the focus was on the 2022 EMX250 Champion, Elzinga who crossed the line in 8th!

In race two, the holeshot went to Pietro Razzini of S11Motorsport DianaMX, but Grau was quick to react and got himself into the lead immediately. L. Coenen was third ahead of Francesco Bassi, Toendel, Bennati and Luca Ruffini, while Elzinga started down in ninth.

Osterhagen did not line up for race two after picking up an injury in his thumb during the crash in the first race.

Though by the end of the opening lap we saw another change for the lead as L. Coenen got by Grau. The Frenchman was looking to respond, though made a mistake and stalled his bike which allowed Razzini to close in.

Further down the order, Prugnieres had an incredible first lap as he managed to pass around 10 riders to find himself in 10th by lap two. Just ahead of him, Elzinga was also making good progress as he passed Bassi for sixth, then Braceras and eventually Toendel.

As the race went on, a nice battle began to form between Prugnieres, Tondel and McLellan who was looking to close in. Razzini just ahead of the group crashed out of third on lap five.

Elzinga was looking comfortable in third before an issue with his bike saw him quickly drop down the leader board. The newly crowned Champion came into pitlane for quick repairs and was able to continue with the heat. He eventually finished in 12th.

In the end, L. Coenen won the race and solidified another perfect 1-1 score and topped the podium ahead of Grau and Prugnieres who made the French fans proud by putting the flag on the second and third steps of the podium.

A strong performance for L. Coenen in the last few rounds also saw him claim the silver medal while Toendel dropped down to the bronze medal position.

Rick Elzinga: “No it definitely wasn’t easy. I was ill from the second half of the year, but managed some good races and managed the bad days pretty well. I think consistency got the job done. Can’t thank everyone enough, everyone at Yamaha, all the people at home and everyone behind me for all of these years. Three years ago, I was cleaning my own bike and now I have the chance to ride in GPs next year, so I can’t be happier!”.

Lucas Coenen: “A perfect end to the season going 1-1. Just a shame about Sweden but anyway it’s good, we are really happy with the team and there’s nothing else I can say”.