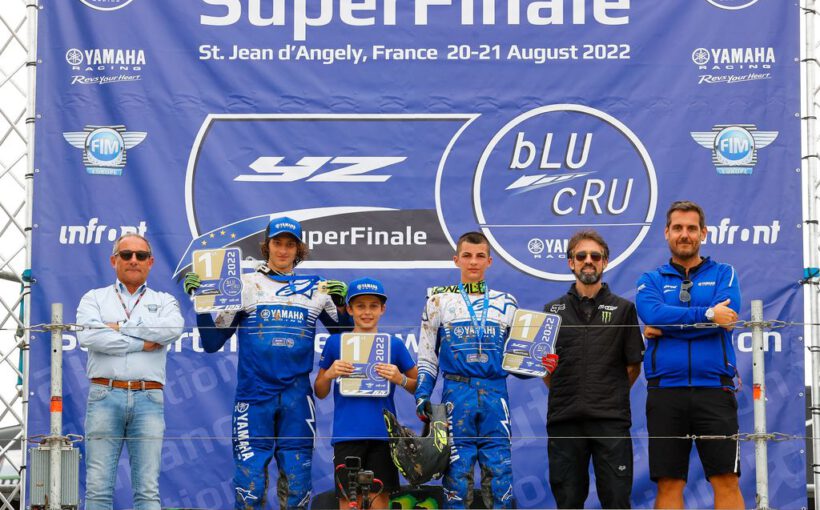 Today marked the end of the hugely successful 2022 YZ bLU cRU FIM Europe Cup SuperFinale, which saw more than 100 riders battle it out for a spot at the unique bLU cRU Masterclass event at the end of this year.

Following yesterday’s YZ65 race, which was won by young French talent Tylan Lagain, ahead of Davi Dür and Willads Gordon, the YZ125 riders were first to take to the track on Sunday morning.

Salvini was given first gate pick after qualifying just 0.055s ahead of fellow Italian Maurizio Scollo, who showed promise in last year’s YZ125 SuperFinale at Mantova, where he finished fifth.

The Italian duo proved to be the class of the field at the MXGP Charente Maritime event, with Salvini just edging ahead in the early stages. Scollo set a blistering pace behind though, but while running less than a second adrift of his rival the #329 rider fell on Lap 6, dropping 10 seconds behind the leader.

Scollo picked himself up and quickly began reeling in Salvini, setting the fastest lap in the process. On the final lap, he was back to within a second of the lead but fell again, seeing Salvini claim the YZ125 SuperFinale victory.

After a mammoth effort, Scollo was still able to salvage second overall, with Denmark’s Nicolai Skovbjerg completing the podium having overtaken Spain’s Salvador Perez earlier in the contest.

In the YZ85 race, Luis Raoul Santeusanio was given first gate pick after dominating yesterday’s Time Practice. The Swiss rider took the early lead ahead of French youngster Tim Langue and Tsankov, who was sidelined on Saturday after a technical problem.

Despite this, the Bulgarian was quickly on the pace and moved up to second on Lap 2, before putting pressure on race leader Santeusanio. Tsankov then moved into the lead after his rival fell and dropped to P2, losing 16 seconds.

This allowed Tsankov to cruise to victory, going one better than he did in the YZ65 class last year, while Santeusanio consolidated a second-place finish to mark an impressive YZ85 SuperFinale debut.

Langue rounded off the podium places in third, beating Spain’s Iker Diez and Israeli youngster Ori Stark, who had been running in the podium positions before a fall early on.

Swedish rider Tuva Nelson came home in 11th overall, seeing her pick up the Top Female Rider trophy, while the youngest rider, Kay Zijlstra of The Netherlands, put in a stunning performance to go eighth overall.

In each of the YZ bLU cRU FIM Europe Cup SuperFinale categories, the top-three finishers and two wild cards will receive an invite to the bLU cRU Masterclass that will take place in November in Spain. There, one YZ125 rider will win a place in a Yamaha-supported EMX125 team for 2023, while the top performing YZ65 and YZ85 youngsters will earn added support from Yamaha Motor Europe for the next season.

Nicola Salvini – YZ125 bLU cRU FIM Europe Cup SuperFinale Winner: “I had a very good start and was able to take first position early in the race. I held onto it all the way through and eventually took victory. I’m really happy for this; it has been a great weekend, so thanks to everyone who made it possible.”

Dani Tsankov – YZ85 bLU cRU FIM Europe Cup SuperFinale Winner: “It was a great race for me and I’m really happy to win. Thanks to my family, sponsors, Yamaha and the team. It was not an easy weekend overall after missing practice yesterday, but in the end I’m first and am now looking forward to the Masterclass.”

Tylan Lagain – YZ65 bLU cRU FIM Europe Cup SuperFinale Winner: “I am very happy to win the SuperFinale in my home country. It was a fun race; I really like the track, and it was cool to meet the MXGP riders also yesterday. Thank you to Yamaha and my family for supporting me, I can’t wait to be at the Masterclass.”