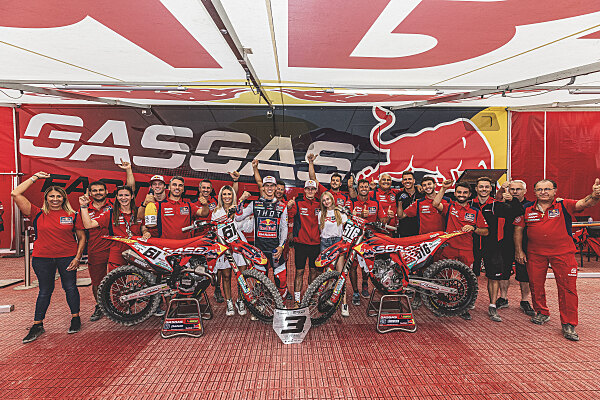 JORGE PRADO RETURNS TO MXGP PODIUM AT THE PENULTIMATE ROUND.

SIMON LANGENFELDER SECURES THIRD IN MX2 STANDINGS WITH ROUND TO GO.

St. Jean d’Angely was the battlefield for the Red Bull GASGAS Factory Racing team earlier today. The historic circuit hosted the penultimate stop of the 2022 FIM Motocross World Championship in front of a crowd of passionate fans from across Europe. Jorge Prado entertained the thousands of supporters – he was involved in the best race of the season and returned to the Grand Prix podium on his MC 450F!

Pushing forward, despite still overcoming a sickness, Jorge Prado had a much better day on French soil. The spectacular Spaniard charged extremely hard in the first moto on Sunday, as he completed the first lap in seventh and climbed to fourth by the time that the checkered flag waved. It was quite the effort on a track that others struggled to pass on! In a way, it was a sign of things to come. Prado ripped the holeshot in the second moto and led for much of the race, before slipping to second on the final lap. 4-2 scores were more than enough for third overall on the day though and, in addition, he retook third in the standings.

Jorge Prado: „I am super happy, especially with the second moto. I did not have a great start in the first moto, so it was hard to come through the pack. The second moto was so much better – I had a great start and pushed until the very end. I came up a little short, but it is a step in the right direction and I am very happy to be back on the podium.“

Simon Langenfelder continued his impressive term with Red Bull GASGAS Factory Racing by showing some incredible pace in the first MX2 encounter. Although he started in fourth and finished in the same position, he posted lap times significantly quicker than the leaders at different points. Unfortunately, a crash on the opening lap of moto two stopped that speed from translating to a podium finish. ‚516‘ did charge from the back of the pack to tenth to take sixth in the overall classification. Most importantly, Langenfelder has secured third in the championship standings with a round to spare. It is impossible for anyone to steal that position from him.

Much like in Finland, a poor qualifying heat on Saturday made Mattia Guadagnini’s life difficult. Despite a bad gate pick, after qualifying in twentieth, he charged from eighteenth to fourteenth at the finish in moto one. It was a valiant effort and one that lifted spirits entering moto two. A better start helped Guadagnini secure twelfth in that moto and the same ranking in the overall classification. The Grand Prix of Charente Maritime will go down as one where the results do not show just how well ‚101‘ rode.

Simon Langenfelder: „I had a good start in the first moto today. I was riding in fourth and it was quite a lonely race! I tried to save a bit of energy towards the end, seeing as I was alone. I had a bad start in the second moto and then got taken out on the first lap. I went from last to tenth with some good lap times. I think that I could have been on the podium, without that crash. The good thing is that I have secured third in the championship now.“

Mattia Guadagnini: „When I practice starts, they are so good. I was better this week and really happy with my progress in the first moto. It was difficult to make passes on this track though. I know that I can be inside of the top five; I want to finish this season on a high and take momentum into the Motocross of Nations. I am learning a lot that I can take into next season.“

Red Bull GASGAS Factory Racing will reload now, ahead of the final round of the 2022 FIM Motocross World Championship on September 04. The hard-pack layout of Afyonkarahisar will host that event.