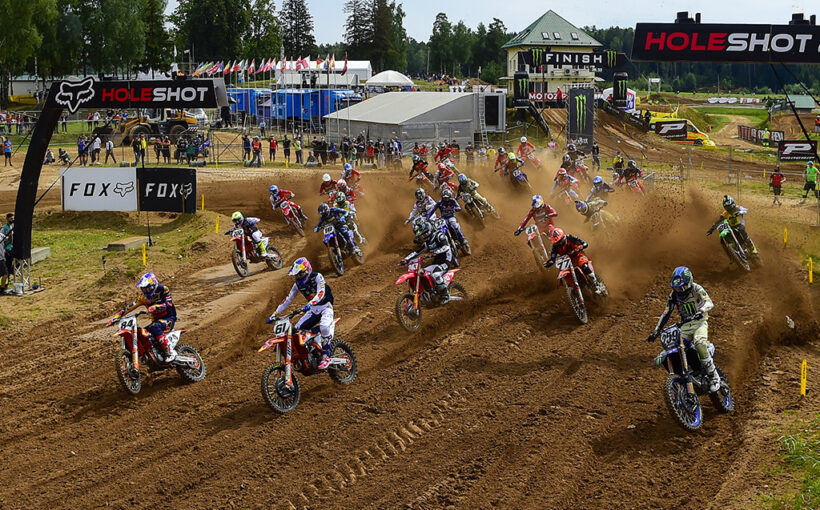 MXGP Gets Back to Work in Kegums.

With the Easter break finished and batteries re-charged, it’s time for the FIM Motocross World Championship to get back to work as round six is set to take place in Kegums for the MXGP of Latvia this weekend.

Since 2005, when Kegums first made its FIM Motocross World Championship debut by holding the MX3 World Championship round, the Latvian track has built an impressive portfolio. The first official MXGP race to take place at the Motocenter „Zelta Zirgs“ circuit was in 2009, with the inaugural event won by none other than Antonio Cairoli in MX1 and Rui Goncalves in MX2.

In the years that followed, Kegums has hosted 14 GPs, including the first ever triple-header in 2020. Along with hosting some of the best Grand Prix weekends, in 2014 the Latvian venue had the pleasure of holding the Monster Energy FIM Motocross of Nations which was won by Team France.

As it stands, Red Bull KTM Factory Racing’s Jeffrey Herlings holds the record for the most victories in Kegums, with six ahead of Cairoli who has five. Though with Cairoli retired and Herlings still recovering from injury, this leaves the door open for new riders to write their name in the history books of Motocenter „Zelta Zirgs“.

This weekend, alongside the regular MXGP and MX2 action, we will see further rounds of the EMX125 Presented by FMF Racing and EMX Open classes, as Latvia’s Karlis Alberts Reisulis of Yamaha Europe EMX125 MJC and his brother Janis Martins Reisulis will aim for top positions on home soil in the 125cc class. K. Reisulis was one of the podium finishers in Trentino, alongside Alexis Fueri of Fantic Factory Team Maddii who took away the series lead from his teammate Cas Valk who also finished on the box.

In MXGP, all eyes will be on the home hero Pauls Jonass of Standing Construct Husqvarna Factory Racing who has been working towards a spot on the podium in the last couple of rounds. Despite set-back in the off-season which then translated in a lack of bike time and a tough first few races, the Latvian did not let this affect him. A win in the qualifying race in Argentina was the boost of confidence he needed and since then has delivered a string of top five finishes. In Trentino, Jonass struggled with illness but here’s to hope that he has had the time to fight that and be on top form for his home GP this weekend.

Meanwhile Team HRC’s Tim Gajser will be the man to beat as he will no doubt be full of confidence following his first 1-1 victory of the season in Trentino. That’s now four GP victories for Gajser out of five, which are very strong stats as he aims for the title this season. Having also won the GP in Latvia last year, he is looking like the favourite for this year too.

Red Bull GasGas Factory Racing’s Jorge Prado was not on the form he may have expected in Trentino, after his GP victory in Portugal. He finished third on the podium, just two points ahead of Monster Energy Yamaha Factory Racing’s Jeremy Seewer who was within touching distance of a spot on the box. Though Prado has been good in Latvia in the previous years, getting his first GP win there in 2019 in MX2 and his first MXGP podium in 2020. Last season he was also on the podium, behind Gajser and ahead of Herlings, so another podium finish is on the cards.

As mentioned, Seewer was within touching distance of the podium at the previous round in Trentino and getting back on the box would be a really positive result for the Swiss who had a couple of tough weeks following his crash in Argentina. Seewer has been on the podium in Kegums once before already, as he placed second overall at the MXGP of Riga in 2020 – so he has what it takes to do it again no doubt.

His teammates Glenn Coldenhoff and Maxime Renaux are another pair to watch with Renaux continuing his strong rookie season having secured his third podium just a couple of weeks ago in Trentino, while Coldenhoff has also been on the rise, producing some very good results. Renaux was also the winner in MX2 at the Latvian Grand Prix last year, so he knows how to lead laps at the Zelta Zirgs circuit, but so does Coldenhoff, having previously won in Kegums in 2015 and 2020.

Gebben Van Venrooy Yamaha Racing’s Arminas Jasikonis is unfortunately set to miss the MXGP of Latvia due to sustaining two broken ribs a few weeks ago. The Latvian Grand Prix is the closest thing to a home race that Jasikonis has, with many Lithuanian fans always making the trip across the border to Kegums. While the tall Lithuanian will not line-up, he will be present at the race to support his teammate Calvin Vlaanderen who has been building in the last couple of races. The first heat in Trentino saw Vlaanderen fight through to sixth, while the second race ended in tears with a big crash ending his race. Though he looks promising as we head into the races this weekend.

An exciting name on the entry lists though is Tanel Leok who after retiring from Grand Prix racing at the end of 2020 will make his comeback for the Latvian GP.

In MX2, things are starting to get interesting, as Red Bull KTM Factory Racing’s Tom Vialle now leads the MX2 Championship standings after a perfect weekend in Trentino where he went 1-1. Meanwhile Monster Energy Yamaha Factory Racing’s Jago Geerts had a shocking weekend that ended in a costly DNF following a couple of crashes, with the Belgian no doubt fired up to take back the red plate this weekend.

Vialle has been looking strong and much like his old self that we used to see taking Fox Holeshot’s and winning races, but Geerts has the advantage of more GP wins in Kegums (two in MX2 and one in the EMX250 class) compared to Vialle’s one victory. But that doesn’t mean that Vialle cannot make it happen this weekend as he will aim to pull away from his championship rival.

While in the last couple of races Vialle has been the man to beat, he has been challenged by the likes of Mikkel Haarup of Big Van World MTX Kawasaki and Nestaan Husqvarna Factory Racing’s Kay de Wolf. This weekend Haarup will aim for his fourth podium finish on the bounce, as he continues his most successful season in MX2 to date. The last couple of weeks have been important for the Dane who has admitted that his performance during timed practice and Qualifying needs work in order to get that strong starting position for Sunday, which will be vital this weekend with the sharp right first corner.

de Wolf is among the podium favourite for this weekend too, having delivered his second podium of the season in Trentino with a second overall. He fought hard against Vialle and with confidence building since his crash in Argentina, we could see him fight for the top spot this time around.

Kevin Horgmo of F&H Kawasaki Racing is another rider to watch, along with Red Bull GasGas Factory Racing’s Mattia Guadagnini who was on the podium last year in Latvia. Guadagnini needs to deliver some good results as he is yet to make his podium appearance in 2022 – but this weekend could be his weekend.

Looking to represent on home soil will be wildcard rider Mairis Pumpurs who will be the only Latvian set to line-up in MX2 this weekend. There is no doubt that Pumpurs will be more motivated than ever to put on his performance in front of home fans.