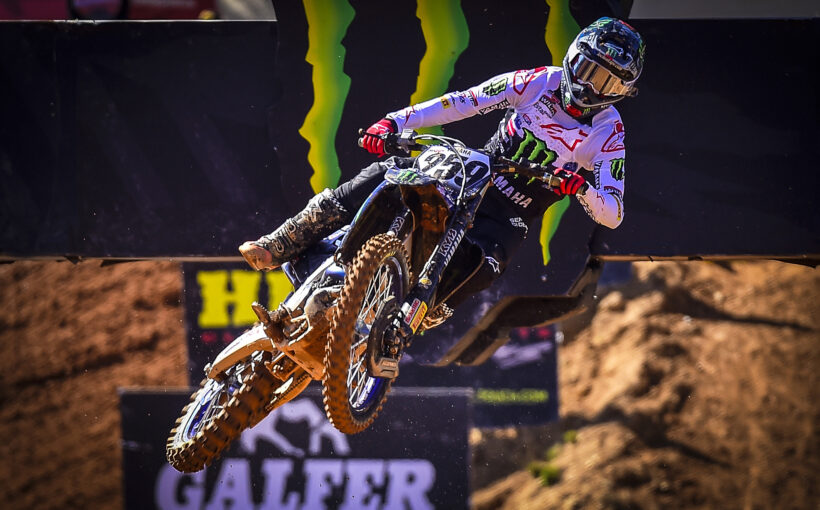 Coldenhoff and Geerts Rule the Qualifying Races in Portugal.

The qualifying day of the MXGP of Portugal has concluded with Monster Energy Yamaha Factory Racing dominant in MXGP and MX2 as Glenn Coldenhoff and Jago Geerts took victories in the races.

Geerts celebrated his third consecutive qualifying race victory of the season, while Coldenhoff secured his first, delivering a positive result that was much needed for the Dutchman as he looks to put the woes of the first few races behind him.

Additionally, today’s action saw the first races of the support classes, who much like the MXGP and MX2, were dominated by Yamaha. In the EMX250 category, Hutten Metaal Yamaha Racing’s Rick Elzinga continued to dominate after winning the opening race ahead of TBS Conversions KTM Racing Team’s Camden Mc Lellan. Meanwhile in the Women’s Motocross World Championship it was JK Yamaha Racing’s Lynn Valk who came out on top and will look to do the same tomorrow in order to secure the red plate from Ceres 71 Yamaha Racing’s Nancy Van De Ven.

Fernandez was searching for a way to pass the championship leader on the opening lap, though could not make it happen, right before the pair both went down. They both got going, by which point they were way down the order.

This gave Coldenhoff a clear path to the lead, with Jonass and Prado on his heels. On lap three Prado went by Jonass to steal second, while the Latvian came under further pressure from his hard-charging teammate Brian Bogers, who had earlier got by Monster Energy Yamaha Factory Racing’s Jeremy Seewer for fourth.

Fernandez’ race then went from bad to worse as he crashed once again. Initially he struggled to get up but walked away from the track moments later, though did not carry on with the rest of the qualifying heat. He may have hurt his hand but will try to ride tomorrow.

On lap eight and after several attempts Bogers was finally able to get by Jonass for third, as Prado continued to apply the pressure onto Coldenhoff for the win.

Further down the field, Gajser was making good progress as he worked his way up to 13th. He managed a few more solid passes before the chequered flag fell and will start the races tomorrow from 7th place.

It was a tough day for Beta SDM Corse riders Alessandro Lupino and Jeremy Van Horebeek as the pair both did not finish the race and will start tomorrow at the back of the grid.

Meanwhile, after successfully defending his position for the entire heat, Glenn Coldenhoff went on to win the MXGP qualifying race, with Prado second and Bogers third. Jonass will start fourth tomorrow ahead of Seewer and Gebben Van Venrooy Yamaha Racing’s Calvin Vlaanderen who finished well in sixth.

Glenn Coldenhoff: “It’s been quite a difficult start to the season and a qualifying heat win is always good. The race went well, Tim Gajser was ahead of me together with Ruben Fernandez and they hit each other, so I moved into the lead. I was managing the situation but Pauls was pushing in the beginning, after I had the pressure from Jorge Prado, but managed to keep cool and take the win which is good, especially after the tough start to the season so this is definitely good for the confidence”.

In the MX2 qualifying race, it was F&H Kawasaki Racing Team’s Kevin Horgmo who emerged with the holeshot, though Geerts was quick to find his way into the lead in the second turn, as Red Bull GasGas Factory Racing’s Mattia Guadagnini followed him to move into second.

Isak Gifting of Hitachi KTM Fuelled by Milwaukee and Big Van World MTX Kawasaki Mikkel Haarup had a nice battle for seventh which lasted the entire race, with Haarup finally getting by the KTM rider on lap seven, though not able to shake him completely until the end.

Sydow then crashed from fourth place, which allowed de Wolf, Vialle and Haarup through. Vialle was looking solid in fifth before he threw away his race too. He got going quickly but fell again on the final lap and finished 13th.

The battle for fourth intensified between de Wolf and Haarup in the closing stages of the race, with Haarup managing to find a way past the Dutchman briefly, as de Wolf was quick to respond.

Meanwhile Geerts took a comfortable win with a 3.129 second advantage over Guadagnini and Horgmo, who was another few seconds behind, to secure his third pole position of 2022.

Jago Geerts: “The track was good in the qualifying heat, a lot better than in the free and time practice, more bumps and less fast. I am happy about my riding, I felt good all day and I’m just looking forward to the races tomorrow, will try to take a good start and hopefully have two solid races and get a lot of points”.