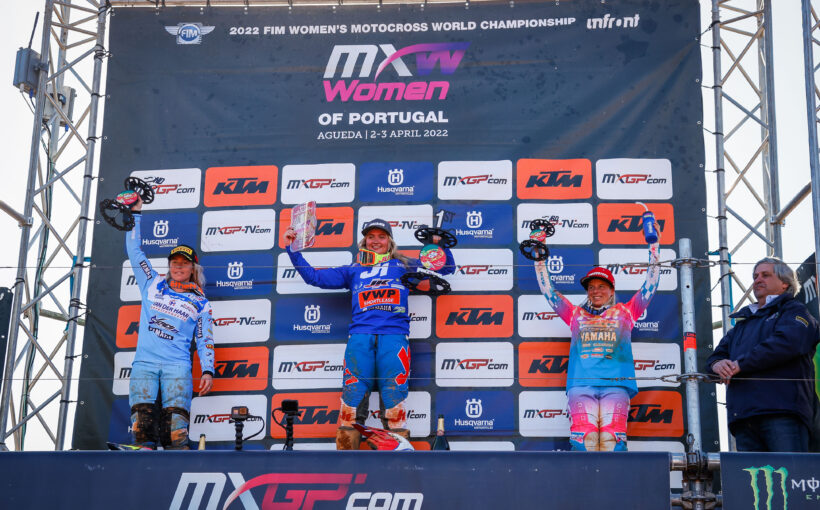 The second round of the FIM Women’s Motocross World Championship saw JK Yamaha Racing’s Lynn Valk dominate both races to secure her first overall victory of the season and take home the red plate.

Before the races even started, defending World Champion Courtney Duncan of Big Van World MTX Kawasaki Racing suffered a huge blow to her title hopes, after a crash in the free practice session left her with an injury and therefore deemed her unfit to take part in the races. This left the door open for Nancy Van De Ven of Ceres 71 Racing and Valk the chance to continue their fight at the top of the standings.

In the first WMX race, it was Sara Andersen with a flying start, as she closely led Larissa Papenmeier of Yamaha Racing 423, Van De Ven and Valk.

Front the get-go, Andersen pulled a nice gap to the ladies behind her, as Valk slipped past Van De Ven and Papenmeier to move into second. Though Van De Ven was not going to let the fellow Dutch rider get away with it, as she slipped back past her.

As Andersen continued her lead, the battle between Valk and Van De Ven intensified. The pair went at it for much of the race, but on lap eight is when we saw Valk finally find her way into the lead. Andersen dropped from first to third and then a lap later to fourth as Van De Ven and Papenmeier got by also.

Further down the field, Martine Hughes of Honda 114 Motorsports was making great progress after starting the race down in around the top 10. She made some nice passes on the likes of Amadine Verstappen of BUD Racing Kawasaki and Shana van der Vlist to finish the race in fifth.

In the closing stages of the race, it was a Yamaha 1-2-3 as Valk, Van de Ven and Papenmeier led the way. Papenmeier made several attempts on Van De Ven, but the Dutch rider was not backing down.

In the end, Valk secured her second race win of the season ahead of Van De Ven and Papenmeier.

In race two, it was Valk that time around who got a strong jump out of the gate, but by the second corner, Van De Ven got herself into the lead. Van der Vlist started well in third ahead of Hughes and Papenmeier. O’Hare was right there in sixth and was applying the pressure onto the ladies ahead.

It took Valk a lap to finally get by Van De Ven for good and that’s when she started to pull away. Though Van De Ven kept it close for the majority of the race, before losing ground on the leader in the closing stages of the heat.

In the end, Valk won the race by 4.199 seconds over Van De Ven with van der Vlist third.

In terms of the podium, a 1-1 result gave Valk her first overall victory of the 2022 season, as Van De Ven placed second on the box with two second place finishes ahead of Papenemeier who was third.

Valk now leads the WMX championship standings with 97 points, 6 ahead of Van De Ven and van der Vlist who is third with 68 points.

The next round of the WMX series will take place in Sardegna on the 14th – 15th of May.

Lynn Valk: “It was perfect. I took a good start for second and took it a little bit easy as it was easy to make mistakes on the track. I got the lead and could control the race so I’m very happy. It’s amazing, it was a good weekend, the riding was very good, but I couldn’t do it without the people behind me, my brother and dad from home, my mum here, my team, my mechanic. I will enjoy it now and will be back for the next race to do my best!”.